The different types of chocolates

Dark chocolate, also known as dark chocolate or bittersweet chocolate is the chocolate itself. This mixture of cocoa and sugar. To be called “chocolate” must contain at least 34% cocoa. Below, we speak of “Chocolate Candy”. The need for sugar depends on the bitterness of the cocoa variety used. He knows a revival of consumption since the early 90s although there is less consumed than milk chocolate.
Unsweetened chocolate

Unsweetened chocolate is made from pure cocoa without added sugar.

Milk chocolate is chocolate that is obtained by adding powdered milk or condensed milk. It contains less than 40% cocoa. U.S. law requires a minimum concentration of 10% cocoa. 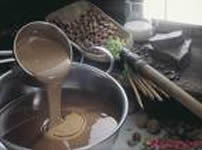 The EU regulations state a minimum of 25% cocoa. Some luxury brands such as Michel Cluizel chocolates offer milk to 45%. It is also calories than dark chocolate (less fat but more sugar). For many years there has been much appreciated and consumed.
White Chocolate

White chocolate is a preparation of cocoa butter, added sugar, milk and flavoring, without any solid component of cocoa. It is mainly used in confectionery to play on the contrast of colors.
Chocolate Cover

The couverture chocolate is very good which is used by chocolatiers and pastry chefs as raw material. It may be dark or milk but it contains at least 32% cocoa butter which makes it very fluid to achieve a coating thinner than a typical coating.

Cocoa is used in various forms in Europe:

In Europe, two major countries most famous for chocolate are:

Since 2003, European legislation has aligned with the guidelines of the National Institute of Appellations of Origin (INAO) governing wine appellations. The following classification describes the quality chocolates:

The World Trade Organization Cocoa (ICCO International Cocoa Organization) has also put in place since 1994 a list of countries producing cocoa and cocoa for flavor remarkable for their flavor and color.